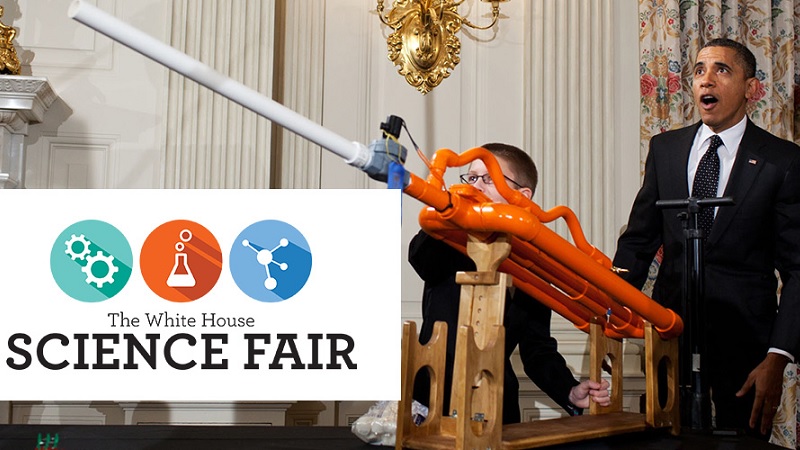 The future of scientific and technological innovation is in the hands of today’s students, President Obama said in his speech at the White House Science Fair on Wednesday.

“Some of the best moments I’ve had as president have been with science and at the science fair,” he said. “There’s nothing that makes me more hopeful than seeing the young people that are here.”

This was the sixth year of the White House Science Fair, and the last one for Obama’s administration. Like previous years, he spent time at each of the student scientists’ tables, talking about the details of their work and their hopes for the future of science.

Presenters were as young as Jacob Leggette, 9, of Baltimore, who convinced a 3-D printer manufacturer to give him a printer so that he could test how well kids would be able to use them.

Yashaswini Makaram, 17, from Northborough, Mass., developed a biometric verification system for cellphones that tracks a user’s idiosyncrasies in picking up the phone to verify identity. The system is able to differentiate between people 93 percent of the time, and correctly identify the phone’s owner 85 percent of the time. Her work is especially relevant in the wake of mobile security debates and concerns.

“Together, through science, we can tackle some of the biggest problems we face,” the president said.

Other code-driven projects included the Spectrum app, which provides a social media space for the LGBTQIA community, and a Mayo Clinic app that encourages cancer patients to find and go to hospital activities.

“If you are already presenting here, you have a project that can change the world,” Payton Carr said in a panel at the fair. She competed in the White House Science Fair in 2013 and is now in college.

The president and panelists also addressed the need to get more women and minorities into science, technology, engineering, and math (STEM) fields.

“When people are young, boys are much more likely to try STEM,” said Elana Simon, a 2014 participant. “There’s no reason why only boys should start at a young age.” The president agreed with her, emphasizing the need to get STEM training and opportunity into all schools across the country.

“We’ve got to get more of our women and minorities into our science, technology, engineering, and mathematics,” he said, before congratulating the day’s presenters on their hard work and achievements.