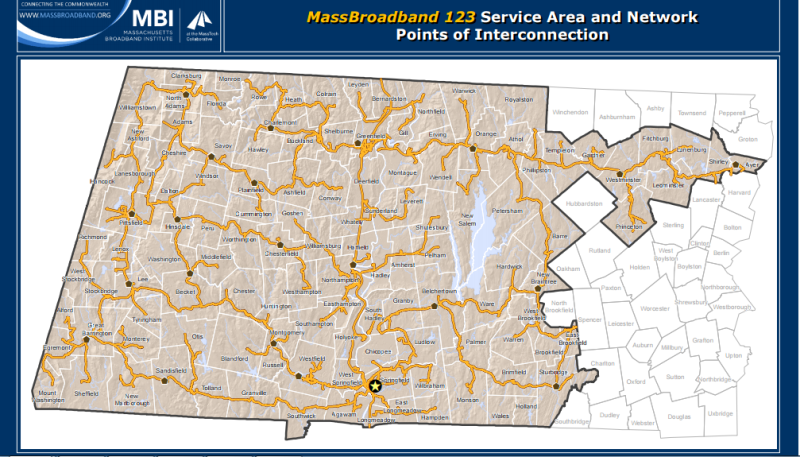 The Massachusetts Technology Collaborative’s program to improve the state’s broadband connectivity will continue despite its contractor’s sudden declaration of bankruptcy, according Brian Noyes, Mass Tech’s director of research and communications.

Mass Tech released a request for proposals for its MassBroadband 123 initiative in June 2010. In February 2011, the organization signed an operating agreement with Axia NGNetworks USA, a subsidiary of a Canadian fiber communications company called Axia. In the Guaranty Agreement, Axia agreed to perform “certain network operator services and to undertake certain financial, operational and other responsibilities.”

On March 22, Axia filed for Chapter 11 bankruptcy in the Massachusetts District court system. In an exclusive interview with 21st Century State & Local, Noyes stated that this announcement came as a surprise, and Mass Tech will continue the broadband program as scheduled.

“It was a sudden announcement,” Noyes said. “Prior to filing, Mass Tech had been resolving a dispute for a couple of years. Axia had not been active in arbitration. We’ll do what we can to continue.”

The purpose of MassBroadband 123 is to offer better Internet access to homes and community buildings in western and north central Massachusetts. Noyes stated that 45 towns in this region do not meet the broad definition of connectivity. Both Federal and state funds fuel MassBroadband 123; Noyes said the $90 million project received $45 million from both the Federal and state government.

Axia’s role was to support the “middle-mile” phase of MassBroadband 123, which gave 1,245 community institutions, including schools and libraries, access to the Internet. Noyes explained that some of these facilities have access to other networks, so they chose not to use MassBroadband 123. As of now, 550 institutions use the network. The middle-mile portion was completed in February 2014.

Towns, rather than public facilities, are the focus of MassBroadband 123’s “last-mile” portion. Each of the 45 underserved towns has Internet service providers that connect to MassBroadband 123. Axia’s role is to work with these providers and manage the network, Noyes said.

Axia will maintain the network for the next 13 weeks in accordance with their operating agreement, which states the company must continue to supply services “irrespective of the bankruptcy, insolvency, merger, reorganization.”

“From our point of view, the bankruptcy filing is a business process,” Noyes said. “They’ll continue to provide access to the middle mile. We want to make sure they hold up their contract with us and the commonwealth.”

Although Noyes said the bankruptcy announcement was sudden, the state and the company had quarreled over the program for a few years. On March 21, MassTech issued an emergency motion asking that the company follow court orders. The emergency motion reveals that Axia officials “coercively threatened to withhold ongoing payments that Axia was required to make under the Agreement” several times since 2014.

The document reveals a more recent dispute from January 2017 in which Axia demanded MassTech give the company millions in “additional payments to which it is not entitled.” When MassTech refused to pay these millions, Axia had “simply begun withholding its performance of some of its more important non payment-related obligations.”

One of the most baffling developments in this succession was Axia’s decision to start going by a different name weeks before declaring bankruptcy, Noyes said. According to the emergency motion, Axia deleted all references to itself on the network website and inserted “a completely unfamiliar and unexplained acronym, KCST USA, as the purported network operator” of MassBroadband 123.

“Put simply, Axia is trying to squeeze Mass Tech into agreeing to its demands without ever having to go to arbitration,” the emergency motion states. “These actions are flat out breaches of the Agreement, and direct violations of the 2014 Orders. They are also malicious, and can have no other purpose than to hurt Mass Tech and the Network.”

In a press release regarding the bankruptcy, Axia revealed that it had operated MassBroadband 123 at an annual loss of more than $3 million. The press release also states that the company tried to address these operating loss issues with the state in 2013 and 2014, and was rebuffed both times. Axia refused to provide a comment to 21st Century State & Local outside the content from the press release.

Noyes said Axia was one of five companies to respond to Mass Tech’s initial RFP, and that the organization chose Axia because “it provided the best value.” He also said Mass Tech is exploring all possibilities to find a new company to maintain the network supporting broadband connectivity.

“The network is still owned by the Commonwealth of Massachusetts,” Noyes said. “That will continue to be an asset we own.”