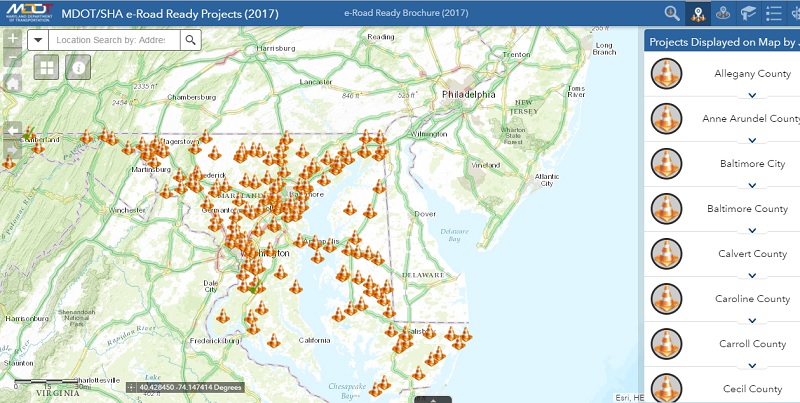 Memorial Day, like many other holidays, sees swarms of cars congesting highways across the nation. With a new online data platform revealing the status of road work projects, the state of Maryland is attempting to make its constituents’ travel plans less grueling.

At the beginning of May, Maryland’s Department of Transportation and State Highway Administration launched e-Road Ready Projects, a live GIS map portraying major projects that have the potential to create congestion.

The map indicates road work projects with a traffic cone icon; by clicking a cone, people can view start and completion dates, the average volume of traffic, speed limits in the area, and news releases about the projects.

Gischlar said that SHA does not maintain every road work project, just the ones occurring on untolled roads. The map, created with GIS tools from Esri, currently has information on 165 projects.

Maryland DOT’s system for informing people about road work projects has transformed over time. At first, SHA printed off a physical brochure to let people know where road work was going on. The department then graduated to a PDF document containing a list of road projects and a hyperlink to a map showing these projects. Gischlar said he used this method for about 10 or 11 years.

The new platform, which has garnered 1,748 page views since it was launched at the beginning of May, is accessible via mobile device and tablet.

“We’ve taken it from the launchpad to the surface of the moon and back,” Gischlar said.

E-Road Ready gets updated every Friday. Gischlar compared the e-Road Ready platform to a “living system,” as it will be updated to reflect new projects as existing ones are finished.

Marshall Stevenson, GIS program support within the Office of Planning and Preliminary Engineering Data Governance Division, said he and a team of two analysts built e-Road Ready. They continue to work with other agencies to obtain information, such as addresses.

“We do leverage a lot of the state of Maryland’s infrastructure data,” Marshall said.

Gischlar said the system is growing. He said the department may add an audio component, which could benefit constituents with vision impairments. His colleagues are also considering other places where such a map may be useful, such as individual neighborhoods.

“We’ve been getting a heck of a good reaction,” Gischlar said. “Our customers really like this system.”