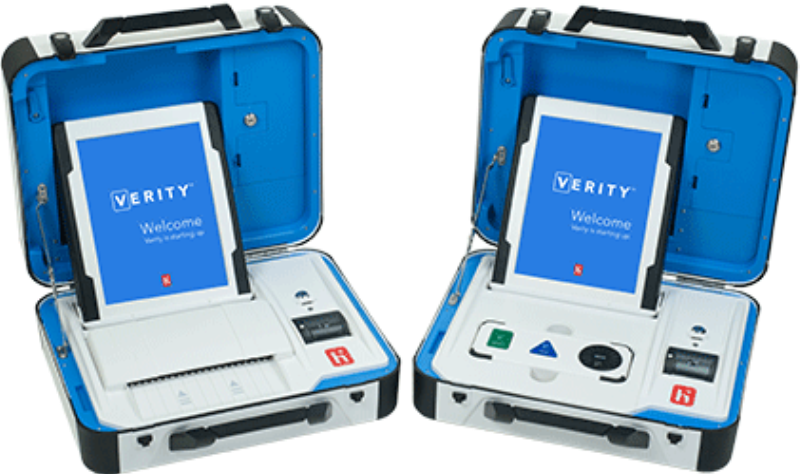 Editor’s Note: This story was updated to reflect that David Becker’s quote was provided to 21st Century State & Local in Sept. 2016 in the story linked above the quote.

The Texas Secretary of State’s office tested installation procedures, sample ballot scenarios, and accessibility. Then, the state of Texas hosted a hearing to get public opinion on the new voting machines. The Verity voting systems also received Federal certification by the Election Assistance Commission in May 2015.

“Verity was born and raised in Texas, and we are proud to reach this certification milestone on our home turf,” said Phillip Braithwaite, president and CEO of Hart InterCivic.

Verity practices a centralized approach to setting up and managing individual voting devices, unlike most direct-record electronic voting systems. A single console monitors and controls up to 12 terminals, which reduces the chance for error and cuts tasks for poll workers.

All Verity machines are air-gapped, which makes them unable to access the Internet and less vulnerable to widespread hacks. However, cybersecurity experts have said that one of the reasons that old voting machines are more resilient against hackers is because they’re decentralized, meaning that hackers would only be able to access one or a few machines at a time, making it difficult to alter voting results.

“There isn’t a single or concentrated point of entry for a hacker,” David Becker, executive director of the Center for Election Innovation and Research, told 21 Century State and Local on September 19, 2016.

The Verity systems allow personnel to access 12 machines at once, which is an increase from the capabilities of old machines.

The voting systems have the latest touch-screen technology, which avoids the calibration concerns that affect earlier generation machines. The 28-pound devices are contained in briefcases for transportation and storage. Voters can switch between ballot languages, adjust the font size and contrast, and control the speed and the volume of the audio if they are using the headphones.

“I’m eager to be getting out front with this new technology. I’ve always been concerned about equipment and software becoming obsolete,” said Earl Parker, elections administrator for Madison County.

Verity also offers a 6-pound device that can be carried outside to serve voters who cannot enter the polling place.

“We’re excited to move to the touch screen,” said Pam Hill, elections administrator for San Patricio County. “We’re excited Verity is smaller and lighter; it will be great for our poll workers. Our expectations are high for the administrative software to be even easier to work with than what we’re using now.”

The process of clearing old election data from the voting machines is automated on the new systems, which saves time for poll workers. Verity systems allow poll workers to print audit logs and reports to provide a “paper trail” of security measures.

“Our poll workers will no longer be required to administer every voting device separately for every election,” said Vicki Shelly, elections administrator for San Jacinto County. “This will reduce risk, reduce errors, and increase efficiency in getting our election night results.”

In all, 3,100 machines have been shipped across Texas and the counties plan to use the devices during 2017 elections.

“As counties replace aging voting equipment, Verity is the logical choice for Texas jurisdictions,” said Braithwaite. “The system is particularly well suited to the growing number of user-friendly and convenient Vote Centers, which more and more Texas counties offer their voters.”