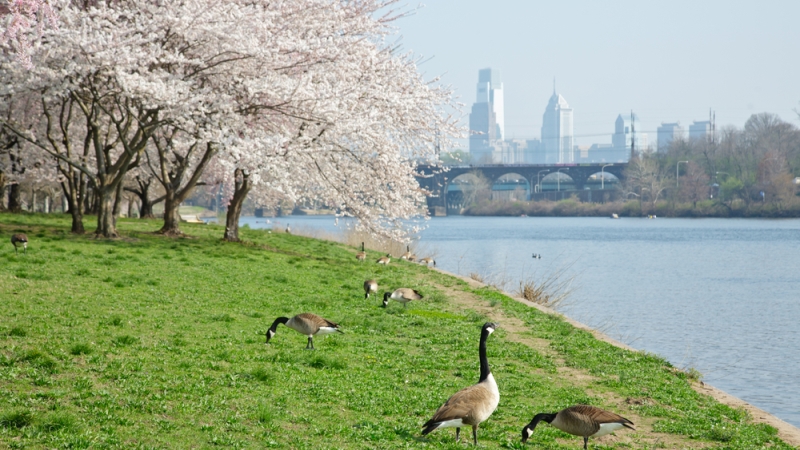 The City of Philadelphia’s Parks and Recreation Department dispatched two employees six months ago to hike the city’s 223 miles of public parks and photograph the trails with a Google Trekker device. As of Oct. 17, the hikers had covered every inch of the trails and traversed a total of 500 miles in the process.

The Google Trekker is a 50-pound backpack equipped with a 15-lens camera capable of taking 360-degree photos. The tech company loaned Philadelphia the device after the Parks and Recreation Department’s special projects manager applied to use it to capture the city’s park trails. Philadelphia, which is the first major municipality in the United States to use the device for this kind of project, must return the Trekker and all the photos the hikers have collected to Google by Oct. 28. Google will then process the data and place complete views of all 223 miles of parks on Google Street View within nine months.

“I’m not sure why they chose us, but we were willing and able,” said David Hatten, a GIS specialist for Philadelphia Parks and Recreation. “The City of Philadelphia has one of the more developed GIS infrastructures.”

Hatten said the Parks and Recreation Department hired two seasonal employees for nine-month contracts to embark on this imaging project. The department hired Conor Michaud and Gint Stirbys, the first two people they interviewed. Both men are outdoorsy. Michaud teaches climbing classes in Philadelphia and ran an outdoor program in Alaska. Stirbys is a mover who hiked the Appalachian Trial by himself. Hatten said they work as a team; one will walk through a trail first and make sure the path is clear and the next one follows hauling the Trekker, trading roles every few miles.

According to Hatten, the two men completed their task relatively quickly, partly due to the nice weather Philadelphia has experienced this year. However, they will continue to record images until the end of October. On Oct. 19, Michaud and Stirbys will photograph the city’s zoo. Parks and Recreation made arrangements with the zoo ahead of time to make sure the animals will be out and camera ready.

Hatten said that, before the end of the month, they plan to kayak down the Schuylkill River with the Trekker to capture the sights. Philadelphia’s GIS team has been collecting images as they gather them and has only a few more memory cards to send to Google, Hatten said.

“They have to stitch everything together and blur out the faces. Trekkers are expensive and it’s not really a moneymaking project for them,” Hatten said. “Having our parks accessible on such a large scale is great.”