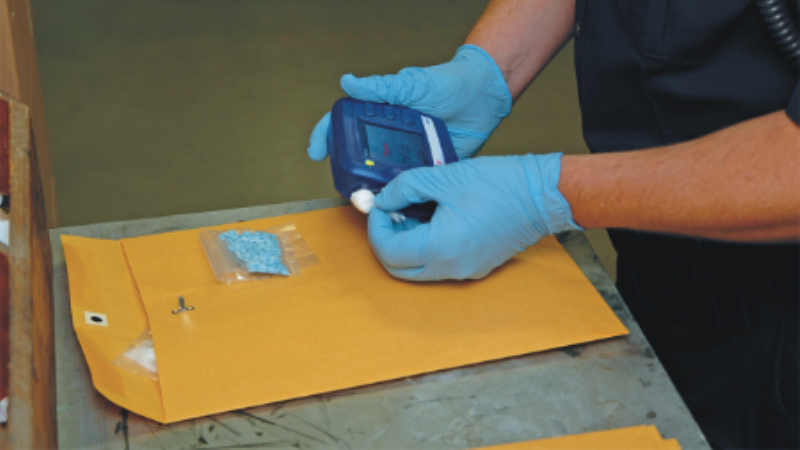 The Bartholomew County Sheriff’s Department in Indiana received permission to purchase a TruNarc Handheld Narcotics Analyzer. The device is able to test for 370 illicit substances without requiring police to open any packaging that may be around the suspected substance.

TruNarc uses Raman spectroscopy, which is widely accepted in early court proceedings. Essentially, the device works by throwing a small laser light at a suspected illicit substance. Every chemical compound scatters that light in a slightly different pattern. TruNarc then compares the pattern with the 370 substances in its library to identify the substance. If a substance cannot be identified, TruNarc offers online support.

Previous drug tests were frequently single drug tests and required the test to be sent off to a lab. However, Thermo Fisher Scientific explains that the device is able to identify dozens of narcotics in a single test. This helps police departments save time and money.

“You had to break the modules and shake them and get the colors and send them for the lab. Those tests were only specific for certain drugs. This machine, anything that’s listed in the library will test,” Trooper Nick Klingkammer told RTV6 in Indianapolis.

The device also helps preserve evidence for court, as it doesn’t destroy any of the substance during the testing process, because the device can scan directly through plastic or glass. This is beneficial in cases where only a small amount of a substance is found.

The TruNarc device not only allows police to scan for more illegal substances, but also provides a measure of safety for officers. Officers were previously required to open packaging and handle the substance in question to test it. This led to dangerous situations, according to Sgt. Jim Stevens. He explained that recent confiscations of heroin have had fentanyl in them. Fentanyl is a pain medication administered through the skin and can cause severe breathing and cardiac problems.

“There have been incidents across the country where officers have gone down (after skin exposure to fentanyl),” Stevens told the Bartholomew County commissioners. “It’s very dangerous.”