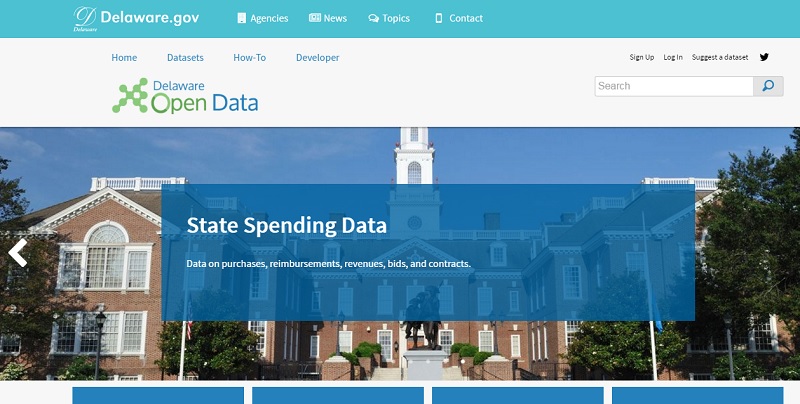 Since it was launched on Oct. 19, 15,000 people have visited Delaware’s open data portal.

A small team within the state’s Department of Technology and Information (DTI) began working on the open data portal last winter, after Gov. Jack Markell issued Executive Order 57, mandating a centralized resource for constituents to find state agency information. DTI worked with the Government Information Center (GIC), which is part of Delaware’s Department of State, to build the portal. In a partnership with Socrata, data.delware.gov was launched less than 12 months later, featuring 32 data sets, 38 maps, and 167 catalog items.

Delaware residents can use the portal to find out if traffic is slowed down because of nearby construction sites, whether their favorite restaurants have passed inspection, where to find a good bike trail, and what companies the state is conducting business with. According to James Collins, chief information officer (CIO) of Delaware, data sets related to how the state is spending money are among the most popular; 1,367 people have viewed the data set called State Employee Credit Card Transactions.

Delaware’s departments of Transportation, Management and Budget, Services for Children, Youth, and Their Families, and Natural Resources are some of the agencies that contributed information to the portal.

“Citizens see us not as different agencies, but as the government,” Collins said. “For us, the open data portal is a huge step in that direction. We’re merely the conveners.”

Collins said that, in addition to making Delaware data available to constituents, the portal also allows members of the public to analyze data in a way that helps the government. He said he wants to engage with the technology community to use data to create recreational water advisories and storm notices. One of his “big dreams” is to work with the tech community to analyze medical and environmental data to create alerts for people who may be susceptible to medical incidents based on the environment.

Collins and his team plan to increase the number of data sets and agencies involved in the open data portal. He said this initiative is an important step in bringing the state out of the “manila folder age.”

“The open data portal is one of our initiatives as we focus on delivering open government,” Collins said. “We hope to get there.”