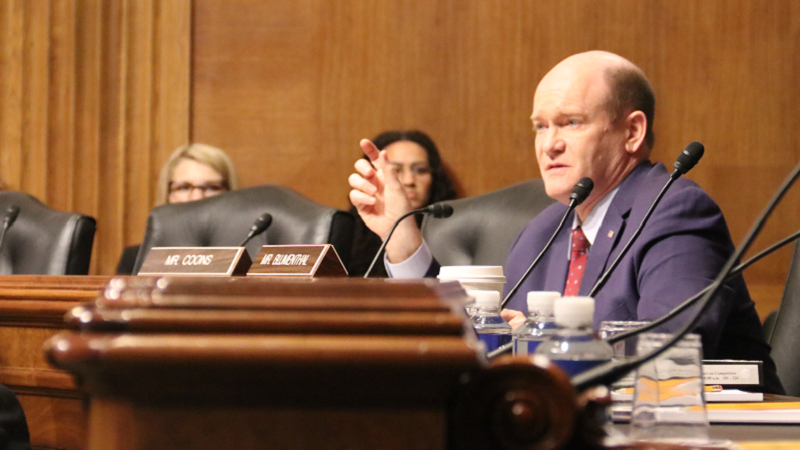 Sen. Chris Coons, D-Del., speaks during May 14, 2019 hearing of the Senate Committee on the Judiciary. (Photo: Dwight Weingarten)

Sens. Chris Coons, D-Del., and Dick Durbin, D-Ill., announced a bill to increase Federal investment in research and development (R&D) by $80 billion over nine years, and make “American Innovation Centers” in metropolitan areas the recipients of the funding.

“The Innovation Centers Acceleration Act will not only strategically fund new R&D, but it will also ensure that growth does not concentrate in a handful of large cities, and instead gives new regions and diverse populations a chance to equitably share in the growth of the global economy,” said Sen. Coons, in a statement.

Just five metro areas – Boston, San Francisco, San Jose, Seattle, and San Diego – accounted for more than 90 percent of the country’s growth in the innovation sector from 2005 to 2017. This concentrated growth came as half of the nation’s 382 metro areas lost innovation-sector jobs, according to a report released late last year from the Brookings Institution and the Information Technology & Innovation Foundation (ITIF).

The Senate bill would create a national selection committee comprised of representatives from Federal agencies and informed by labor unions, research institutions, and private industry, to determine the American Innovation Centers. A total of nine Innovation Centers would be designated.

The National Science Foundation (NSF) is the primary institution through which the grants would be awarded. Grants may exceed $1 billion per year for each Innovation Center, and grant renewals would be evaluated by the selection committee every three years.

The legislation comes as Federal R&D investment has fallen to 0.61% of the GDP of the United States – the country’s lowest level since 1955. The U.S. is also projected to fall behind China in R&D next year for the first time, according to an ITIF publication.