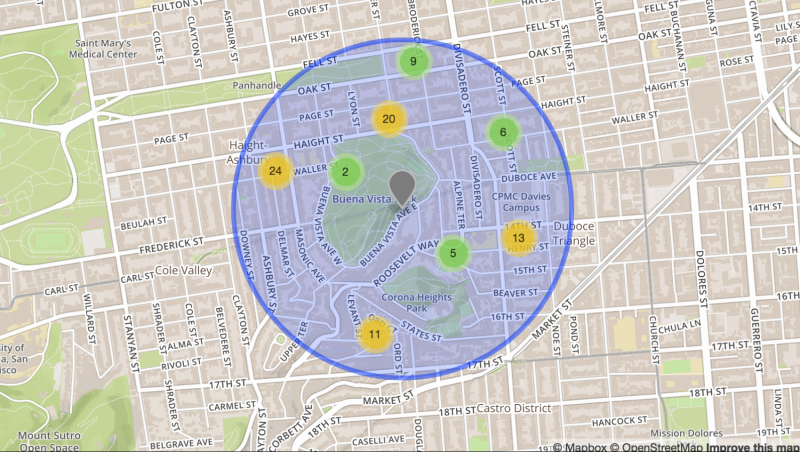 The city has been publicly publishing crime data for as long as its open data portal has existed. However, there hasn’t been a way for the public to search the data geographically. The Clery Act requires colleges and universities to report statistics on specific crimes that happened within roughly 500 feet of anywhere their student population went. Because of the geographic requirement, police were having to pull custom queries. With the Clery Act in mind, the SFPD wanted to give the public a way to search data geographically, both to save staff time and increase public access.

Jason Lally, the city’s open data program manager, discovered there was a way to adjust the existing open data portal code to make geographic searches possible. Lally put together a prototype user interface that queried data around an address and a span of time. A user received a map of incident points and a table that the user could download.

While the prototype could serve the needs of universities and colleges, Lally wanted to refine the product. The city then turned to Code for San Francisco, a volunteer-based organization that is working to make the city a better place to live through the use of technology. Volunteers at Code for San Francisco conducted interviews with the SFPD and local universities to truly understand what users needed from the open data portal.

After its user base research, Code for San Francisco put together a team of volunteers and worked with corporate partners Microsoft and Segment to develop the new capabilities. Earlier this year, the team released the beta version of sfcrimedata.org. Once the 2016 SFPD incident data was available on San Francisco’s open data portal, the city sent a marketing blast to the individuals responsible for safety reporting at local San Francisco colleges and universities alerting them to the new resource.

Since its release the team has already deployed new capabilities. Beginning in February, users now have a polygon search capability, meaning they can draw an irregular shape around a specific location–such as a college campus–to focus a search for crime incidents on a specific location and its immediate surrounding areas.

The team is also working on a capability that will allow users to create reports specifically targeting campus safety-related crime incidents. To help promote the site, volunteers are also working on Search Engine Optimization so prospective students and parents are more likely to find the site and conduct their own searches.

While the site is still in beta, the team plans to enhance the site through 2017 and complete its first official release by mid-January 2018 to align with the release of the 2017 SFPD Crime Data.