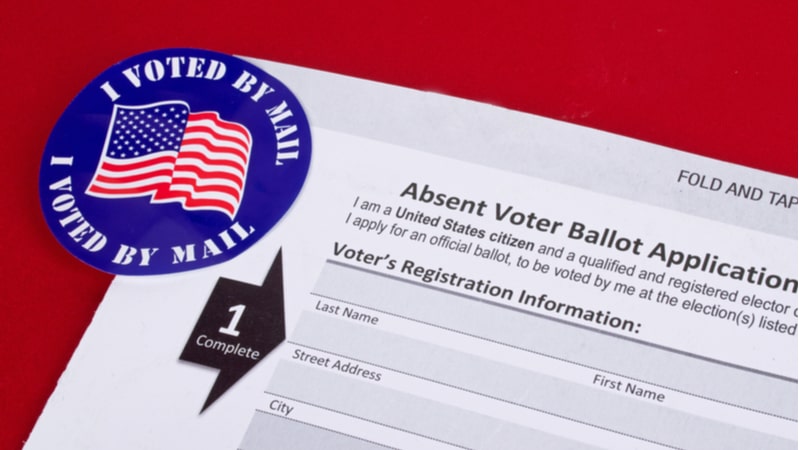 The U.S. 2020 general election is drawing ever closer, but complications posed by the ongoing COVID-19 pandemic are adding an enduring set of worries for conducting a smooth election process. Public health experts and election officials alike remain largely stumped on the best ways to conduct the general election amid the pandemic.

In part one of our series, we explored the impact that the pandemic has already had on the election process, and how states have responded thus far. In part two, we will explore what options exist – both high and low tech – for safeguarding public health while maintaining a secure and fair election process.

As we discussed in the first part of this series, some states that haven’t held their primary elections yet are looking to increase mail-in voting. To understand how this could be accomplished either for the primaries or for the general election in November, let’s take a deeper dive into how some states use vote by mail, and how it could be implemented nationally.

Sightline Institute, a think tank focused on Northwest policy, has championed the need for voting by mail in recent months. Kristin Eberhard, the think tank’s leading expert on electoral reform in the Pacific Northwest, wrote that voting by mail is the solution to make election safe and accessible, even beyond the coronavirus pandemic.

She explained that vote by mail, sometimes called vote at home, allows voters to fill out ballots in the comfort of their own homes. The state will mail out ballots – two weeks before Election Day in the cases of Washington and Oregon – to registered voters. Voters can then either return completed ballots by mail, or drop them off at a secure location.

Vote by mail eliminates all physical contact – from waiting in line to grabbing an ‘I Voted’ sticker – from the practice of voting. This has obvious benefits during the current pandemic, but Eberhard argues it can also increase voter turnout, encourage voters to vote all the way down the ballot, and even improve election security.

Because ballots are barcoded to each individual voter, it’s difficult for voters to vote more than once. Only one ballot from each barcode is counted and ballots without barcodes are rejected, Eberhard said. She adds that vote by mail prevents non-citizens and deceased voters from casting ballots. Further, paper ballots are virtually unhackable.

The Centers for Disease Control and Prevention (CDC) recommends that jurisdictions consider vote by mail as an alternative to direct contact voting. If states start now, they can have vote by mail options ready by November, Eberhard predicts.

Vote by mail doesn’t come for free, however, and election costs are likely to rise. The Brennan Center for Justice estimates that making vote by mail available to all voters would cost between $982 million and $1.4 billion for ballot printing, postage, drop boxes, secure ballot request technology, and other expenses.

By comparison, For the center reckons the cost of maintaining in-person voting at $271.4 million, including cost of cleaning supplies to mitigate spread of COVID-19.

In a bid to overcome some of the traditional mail-in ballot hurdles, new platforms such as OmniBallot Online are providing hybrid mail-tech voting solutions. OmniBallot, developed by Democracy Live, electronically sends and receives ballots to voters who may not be able to make it to the polls, such as members of military, individuals overseas, and voters with disabilities.

Already in use by the Department of Defense, OmniBallot leverages the FedRAMP-approved Amazon Web Services cloud to create a secure, encrypted online portal for ballot exchange. Once a vote is received, the ballot is counted and tabulated on paper.

States such as West Virginia are counting on OmniBallot to conduct primary elections this year. Following criticisms of voting app Voatz, Secretary of State Mac Warner emphasized security advantages of the OmniBallot solution. “The availability of this technology in W.V. is a substantial security improvement from traditional W.V. electronic absentee voting options, which can only be done via less-secure fax or email attachment ballot transmissions,” he said.

Drive-thru voting is still relatively rare phenomenon that more state and local governments may consider to fight the spread of the coronavirus while empowering civic engagement. With this method, voters fill out ballots and drop them off in a designated dropbox.

Drive-thru voting can also include having citizens cast their ballot on a disinfected screen from the comfort of their cars, or a poll worker handing a disinfected ballot to the voter through a car window.

It has similar security and convenience benefits to voting by mail, but with the addition of saving money on postage and maintaining the feel of civic engagement. Drive-thru voting is also one of the CDC-recommended alternatives to in-person ballot casting, and towns such as Racine, Wis., and Brooklyn, Ore., are giving it a trial run. Massachusetts residents are calling on the state to allow for drive-thru voting wherever possible via a Change.org petition.

Of course, drive-thru voting still requires the presence of at least some poll workers, and unguarded drop-off box could lead to vandalism or fraud. During the COVID-19 pandemic, poll workers are also needed to disinfect equipment. But, generally, risks imposed by drive-thru voting seem to be in line with risks incurred by traditional or other alternative methods.

One potential replacement for in-person voting that has earned some recent media attention – not all of it good – is app-based voting. Among the more notable is Voatz, an app that uses smartphones, facial recognition, multifactor authentication, and blockchain technology to allow voting with smartphones.

West Virginia and the city of Denver, among others, have turned to the Voatz to enable residents living abroad and voters with disabilities to cast their ballots. While some states and localities have piloted the app in either small local elections or for the 2018 midterms, it has yet to be used in a general election.

West Virginia initially used the app in the 2018 midterm election and intended to use it for its May 2020 primary but ditched that plan last month. The decision came after increased scrutiny of the app’s security, including from Sen. Ron Wyden, D-Ore., who called for an audit of the app, and a report from the Massachusetts Institute of Technology (MIT) detailing potential cybersecurity and data privacy issues.

Beyond concerns specific to the Voatz app, some cybersecurity experts have questioned whether voting via app is even doable at this point.

“The consensus of security experts is that running a secure election over the internet is not possible today,” said James Koppel, co-author of the MIT report. “The reasoning is that weaknesses anywhere in a large chain can give an adversary undue influence over an election, and today’s software is shaky enough that the existence of unknown exploitable flaws is too great a risk to take.”

On top of existing cybersecurity and data privacy concerns, the tight timeline for the remaining primaries and even the general election makes it highly unlikely that app-based voting will be rolled out for any stage of the 2020 election. Widespread deployment of a new voting app – which would be a fundamental change to how states vote – would not only be a logistical nightmare and expensive, but it also could shake public trust in the election.

“We all have an interest in increasing access to the ballot, but in order to maintain trust in our elections system, we must assure that voting systems meet the high technical and operation security standards before they are put in the field,” says Daniel Weitzner, co-author of the MIT report. “We cannot experiment on our democracy.”

The pandemic’s persistence during a general election cycle is creating unprecedented challenges. Preserving the validity of the election, public trust in the voting process, election security, and public health are all paramount. Federal, state, and local governments have an uphill battle ahead of them in the lead-up to November, but advancing democracy in the face of adversity may also serve as the catalyst for technology to be modernized, new voting options to be tested out, and voter participation turnout to tick higher.