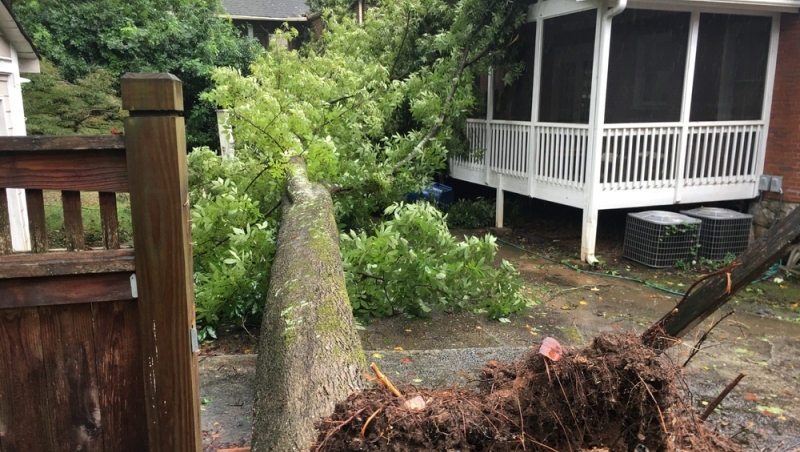 Georgia citizens were able to submit an online form to report the damage to their property during and after Hurricane Irma. The website was launched on Sept. 7 and GEMA received 210 reports in a 48-hour period from the beginning of the hurricane.

“I got to give it up to Georgia citizens,” said Robbie Bagby, GIS coordinator for GEMA. “They really showed up and found this thing.”

Citizens were able to attach pictures of the damage to their reports and rank the level of damage in categories: minor, major, destroyed, or inaccessible. An icon would then show up on GEMA’s dashboard in green, yellow, orange, or red depending on the level of damage that citizens reported. Even though the Georgia citizens weren’t emergency management professionals, their judgments of the damage was mostly accurate, according to Bagby.

“They were being pretty honest,” Bagby said.

Georgia has to coordinate 159 different jurisdictions that range from urban areas like Atlanta, to more rural counties, which make up about two-thirds of the state.

“I just looked at it from a different perspective and said how can we get the data as quickly as possible,” said Bagby. “Let’s put this in the citizens’ hands and see what happens.”

Bagby said that he was able to put together the GeoForm and the Engaged Citizens Damage Assessment Dashboard in only one day using Esri’s available data and customizable platform.

“And I’m not a coder by any means,” Bagby said.

FEMA received a direct link to the real-time data on the dashboard in order to determine where to send its resources. Without this technology, it would usually take several days for emergency management officials to go out and inspect damaged areas. With this crowdsourcing method, GEMA and FEMA officials know about the damage right away.

In order to encourage citizens to use the platform, GEMA communicated with the counties’ emergency management directors, and state partners within the transportation and health industries to create awareness about the platform.

“Eventually word got out and you can definitely see the counties that used it the most,” said Bagby.

Bagby said that in Camden County, one of the areas that generated the most traffic, police officers were going door to door, helping citizens fill out the GeoForm on their iPads.

Bagby said that he wants to continue working to improve the platform in order to use it as a way to standardize the state of Georgia’s damage reporting system. Since Bagby only had one day to set up the platform, he hopes to make more improvements when he has more time. Bagby said he wants to improve the design and gather opinions from counties as to what they want out of the website. Bagby said that the state is already communicating with local leaders about how the platform could be more helpful.

“It’s their product, not ours,” Bagby said. “We just configure it for them and let them use it.”