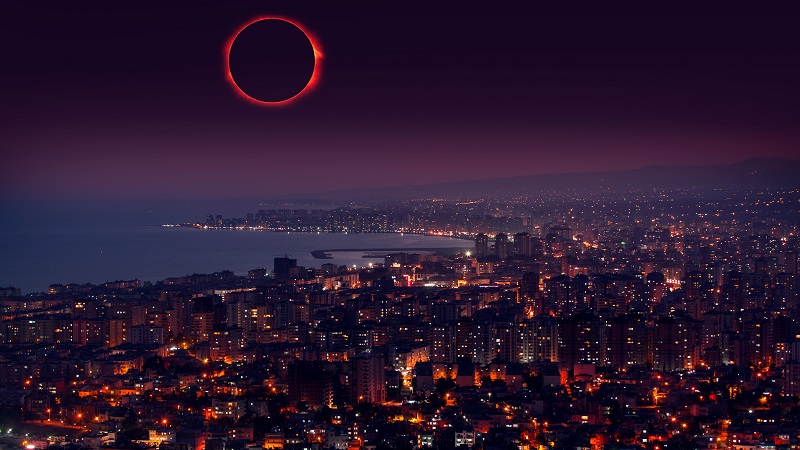 Cities including Salem, Ore., and Casper, Wyo., turned to Esri’s Geographic Information System (GIS) technology when thousands of visitors poured in to watch the total eclipse on Aug. 21.

Esri’s GIS technology played a role in helping the cities prepare and manage critical infrastructure, personnel, and emergency resources throughout the eclipse.

Salem, the capital of Oregon had a population of 167,419 as of 2016, and officials estimated that at least 50,000 extra people would visit for views of the eclipse. The city began initial planning last year and accelerated their planning efforts in March. The city of Salem used its existing technology infrastructure to host its GIS platform, develop data unique to the eclipse, and build dashboards for public officials to visualize the information. Salem established an eclipse data team with GIS professionals and professionals with other expertise to work throughout the planning and event.

During the day of the eclipse and during other eclipse related events, data about event attendance, accidents, and traffic, was sent out to public works, law enforcement, fire departments, and public information offices. The data would be available in order to send personnel to the correct areas of the city in case an incident were to happen.

To prepare Salem citizens for the eclipse, city officials sent out advice about the influx of visitors.

“We tried to be as positive as we could while giving pragmatic advice,” said Kenny Larson, communications and community management for the City of Salem City Manager’s Office.

As a result, most of the residents decided to watch the eclipse from their own yards in order to avoid traffic in parks. Also, additional staff and amenities were deployed to parks where the biggest populations were expected to gather. Because hotels were booked, the city extended park hours for those visitors who wanted to stay overnight in the parks.

“We didn’t have anything eclipse related that happened,” Larson said. Larson said that one of the only incidents was having to chase a family of raccoons out of a dumpster.

Susan Ross Blohm, enterprise services manager for the City of Salem, said that having Esri’s platform allowed the city to provide real-time data to the appropriate officials rather than tracking information more slowly on a spreadsheet.

“Without [GIS], they probably still would have made good decisions but the GIS data allowed them to make more accurate and more timely decisions and probably better decisions,” Ross Blohm said. “We empowered our citizens to make good decisions as well.”

The city of Casper, Wyo., which has a population of about 55,000 people, prepared for an influx of 35,000 people for the eclipse. The local governments in the state of Wyoming began preparing for the event a couple of years before because the cities weren’t used to attracting so many visitors.

“We were compiling information to see where we would see populations forming across the county,” said Denyse Wyskup, regional GIS administrator.

The city of Casper found that they had many people driving in for the day from the more populated area of Denver, Colo. Overall, the city also had no out-of-the-ordinary incidents during the eclipse. However, there were some traffic jams leaving the city to get back to Denver.

One of the city’s biggest concerns was that visitors wouldn’t be used to Wyoming’s hot and dry climate, which could trigger higher incidents of heat stroke and sunburn. City officials were also concerned about rattlesnake bites. In order to mitigate these potential health problems the city created a web application that tracked the wait times at the area’s hospitals. The app would show a green triangle if the wait time was one hour or less, a yellow triangle if the wait time was two to four hours, and a red triangle if the hospital was at capacity. Public safety professionals could view the app to know where to direct potential patients.

“The web apps that were designed using the Esri technology were really intuitive and easy to use,” Wyskup said.

Wyskup said it took her about 30 minutes to train health professionals how to use and update the data within the app. Wyskup said that if she were to do anything differently, it would be to provide more real-time data about other eclipse related incidents like the information in the hospital app.

The city of Casper experiences about a 200 percent increase in its mapping platform use during the eclipse. Along with providing information to the health department, the fire department, and law enforcement personnel, the city used filters to allow relevant data to be sent out to the public.

“We’ve added the ability for the public to interact with the data,” Wyskup said. “GIS is kind of the great communicator. We’re really that information hub.”