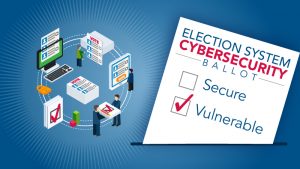 It wouldn’t be very hard for a hacker to access U.S. election systems, according to a recent report by the Institute for Critical Infrastructure Technology, titled “Hacking Elections is Easy.” “Every four years, during the presidential election, the same stories re-emerge acknowledging that the e-voting systems are vulnerable to the same old attacks, without any change in the security or oversight of the systems,” James Scott and Drew Spaniel write in the report.